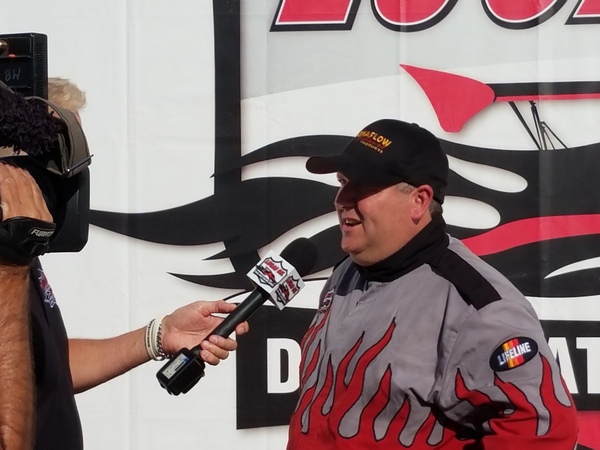 Andy begin is love of racing via his older brother Joe. Andy crewed for teams like Chuck Shelton and Doug McMannis when Joe was building and maintaining their boats. Andy got to test Chuck's boat at the age of 16 and this rest is history.

Andy started competing as a driver for The Stokes Family (Gary, Eric and Sylvia) in an open cockpit boat named "Cole Fever"! Winning Rookie of the year and The Points Championship in 1992,1993 in the Cole Hydro with a top speed of 133 MPH.

Then Andy started competing in a boat co-owned with his brother named "Parental Discretion Advised" in the Pro Eliminator category.

After a few years there was the itch to go faster and in 1997 he made the move to the Pro Modified category with speeds nearing 180 MPH.

Andy moved up to the professional category of Top Alcohol Hydro thanks to some very generous friends and sponsors Tom and Kathie Cowman in 2000. That year the team set the NDBA ET and MPH records at 5.61 @ 215.66 MPH in a 1/4 mile course, as well as, winning the prestigious World Finals of Drag Boat Racing at Firebird Lake in Chandler , AZ!

Years of partnerships with Bob Genther driving his "Deja Vu" and Old Dogs - New Tricks" entries, as well as, Kent Price's "Black Dragon" leading us today with the current boat being the fastest one to date "Running With Scissors!"